One Week To Go!

As I write this, the Dutch contingent is USA-bound!
Making the trip are:

* Niels' sister, Ingrid (on her first trip to the States)

I spent my last night at the Prices, who have so graciously put me up for the last six months or so and made my transition from Michigan to Ohio so much easier. They are a wonderful family and I will miss seeing them every day.

We'll pick up the Dutchies around 6 this evening and then host a more-than-full house for the next week. His family will stay at our house while we're on our honeymoon, using it as a starting point for many day trips.

We appreciate and covet your prayers for the next week as we make final plans for our big day, and for me as am immersed again in the Dutch language. I've been practicing, but I'm still at about a two year old level! Thank God for grace! I do think our dog, Bailey, will be bilingual by the time they leave!

I imagine posts will be sparse in the next few days. Watch our wedding blog for pictures for our much anticipated wedding day!!!

This week the odometer on Miles, my 1998 Mazda Protege, passed 100,000. It's my second Protege. I drove my last one to 140,000, so I'm sure Miles will stick around a bit longer. As I watched the numbers flip to six digits, I remembered a piece I wrote six years ago when I first bought this car.

Recently, I experienced a difficult betrayal. This friend had been my constant companion for nearly a decade. She helped me move from Texas to Wisconsin to Iowa back to Wisconsin and finally to Michigan. In Maggie’s presence, I had prayed about countless decisions. When I was with Maggie, I knew that I would get wherever I needed to go. Sometimes we would get a little off track, but in the end, I never doubted her reliability. To the untrained eye, that heap of teal and metal might simply have been referred to as a 1994 Mazda Protégé DX. To me, however, Maggie was my faithful and consistent friend. For eight years, other than my faith, only Maggie had been a constant in my life.

When her transmission started to slip, I took her to our regular mechanic. He informed me, “Well Jen, it won’t be cheap. And she’s going to need a specialist. If you’re thinking about replacing her, this might be a good time.” Such harsh words for my friend! After conceding that neither a new car nor a fixed-up Maggie was in my future, I began my search for new-to-me car.

I’ve always been a bit of a list freak. Though I do have an odd fascination with research, I think it’s also a coping mechanism I’ve adopted since my parents’ divorces. I’ve prided myself in not making emotional decisions. Feelings are fickle, so I find assurance in a list of long pros and short cons. I began my quest with a chart of “must haves” and a “wish list.” I used my bank’s online calculator to create a spreadsheet of monthly payments based on different loan amounts and percentage rates. I color-coded the chart so I could tell at a glance if how a particular car would affect my budget. I confidently approached the dealerships armed with charts and lists and Blue Book values and Consumer Reports. Truth be told, I really wasn’t sure what I wanted, but the preponderance of my preparedness fooled the sales staff. When approached, I would say, in one breath, “I want a sedan, no older than four years, with automatic transmission, power brakes and steering. If it doesn’t have those things, I’m not interested. I also want a CD player, power windows, mirrors and locks, cruise control, dual airbags and keyless entry. Oh, and I want a ridiculously low monthly payment. Still think you can help me?”

After two weeks, my mind was so overwhelmed with figures and data that I could hardly keep the cars apart. As I walked the lot of the eighth dealership, I was tempted to absent-mindedly point at a car and say, “Silver. That’s pretty. I’ll take that one.” I just wanted to make a decision and be done with it. But I knew I would be living with whatever decision I made for at least the next several years as I made payments. In the end, even though I test-drove every model in its class, I bought a later model version of my Protégé. Though it was familiar, everything was a little newer and cleaner. It felt like home.

As I drove Maggie that last time, I started thinking about my bizarre attachment to a car. It was just a material possession, one that I had long since given to God. But then I remembered that Maggie symbolized the beginning of my restored relationship with my mom. As a fresh-faced college grad, I invited her to help me make my car-buying decision. When she flew to Texas to help negotiate the sale, it was the first opportunity in a long time that I had initiated her input in my life. It was also the first time since the divorce that I felt she made me a priority.

Driving home was a sentimental journey as I thought about how much my life had changed and stabilized in the last eight years. I also wondered what the next eight years might reveal.

It’s funny to think that God can use inanimate objects to reassure us of His grace. As I filed my charts and notes, I compared the parallels between choosing a car and finding a spouse.

I realize that trust issues are more easily assured in matters mechanical than matters of the heart, but I felt God’s quiet assurance that if I can make a good decision with this car, that I will be that much more careful about selecting a spouse. I have my lists and my hopes. I’m doing my research and when the time is right—His, not mine—I think I’ll be able to make that decision with the same peace as I’m feeling driving my new car. 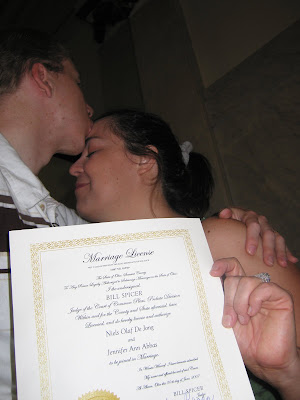 We are officially licensed to wed. We were tempted to elope when we went to the courthouse, but decided we could wait a few more days.

The courthouse itself was gorgeous! We admired the glass and jade atrium before signing in with the clerk. We passed them looking at old marriage registrations from the 20's. Lots of rubberworkers in Akron at that time! Most of the brides were 18-20 though we saw one as young as 14! Wonder where those couples are now...

The process was fairly quick, even with the special circumstances with Niels not being an American citizen.

One more check off our dwindling to do list!
Posted by Jen @ de Jong Dream House at 11:07 PM 1 comment: