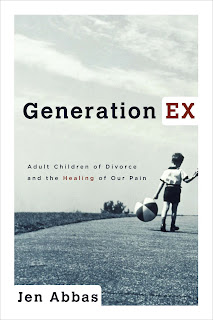 My book, Generation Ex: Adult Children of Divorce and the Healing of Our Pain, released five years ago today. It's hard to believe that so much time has passed already, but when I think of all that has happened in that time, I'm amazed it's been that long!
I wrote Generation Ex as a single career woman, living in Grand Rapids, Michigan in a townhouse with my dog. At the time, I wondered if I'd ever marry and if I did, if I would ever achieve the marriage of my dreams.
I'm writing this blog post as a married, stay-at-home mom, living in Canton, Ohio in a house with my husband, my son, and my dog. The man I married amazes me every day and I have no doubt that I have the marriage of my dreams.
Five years ago, when my book released, I was just a few short months removed from sustaining the head injury that killed my ability to write (among many other things). Most of that year is lost in the fog of forgetfulness. I spent more time in rehab than I did promoting my book, and so it wasn't a huge surprise that GE went out of print a year later, and that I was unable to fulfill my contract for a follow-up with another publisher. Fortunately, one of the interviews I did do was with Family Life. And conversations there led to another contract, a reprint of the book without the updates and revisions I had hoped for, but was physically unable to do.

It's been a good arrangement, and I think Family Life will keep my book in print for a long time. My book was never intended to be an instant best-seller, and other than occasional spikes on the Amazon rankings, I doubt it ever will be. What it has been, however, is a quiet word-of-mouth, pass-it-around life changer. And really, how can I complain about that? I've been humbled to receive emails almost every week from readers who tell me that the book has helped them find healing and restoration in their relationships. I know of about ten books that have quoted Generation Ex. I know of pastors who refer to it when they teach on divorce and remarriage. I know of a couple of marriages that have been saved in part because of it. I know of sorority groups that have gone through the book together. I know of counselors who recommend the book to both parent and adult child. I'm humbled and proud to have written a book that is making a lasting difference in people's lives.
I still struggle with the loss of my ability to write. I still have the excel spreadsheet I had posted in my office in my townhome. I had one hundred book ideas, including eight series that I still believe would be marketable and successful today, and more so than GE because of their broader audience. Just reviewing the titles now stirrs my heart again with that old writing muse, and I'm encouraged by the occasional flashes of my "old head," but alas, my broken brain doesn't remember how to get started. There is a children's series on my list, and I hopethat maybe I can start there someday. I have a book I want to write for Daniel, about being a Dutch-American. Maybe I can start there. What I would give to be able to start again...
Posted by Jen @ de Jong Dream House at 10:58 AM

Thank you for your blog and for the book. I am currently going through a divorce that I don't want but know I can't control. Your words are giving me guidance on what to try and do to help my childern (11, 9, and 3). Knowing that you are married and happy now has given me hope for them.

I am currently writing a blog about what my life is like with this divorce. I hope to someday use it's content to share with my children the thoughts and feelings that I have.

Great blog. I had a great time reading it.