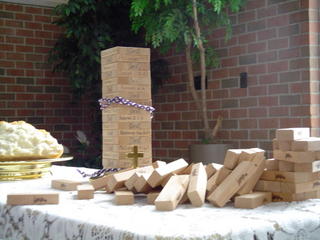 I'm at an age where I've been to more than my share of weddings, and truthfully, I'm also at that age where I can be more cynical than celebratory. Reminds me of an old "Friends" episode, "I'm totally happy for you...well maybe, mostly happy and a teeny bit jealous...okay, mostly jealous, but still happy."

Most the weddings I've attended this year have been for couples a decade younger than me. When I was their age I thought it was crazy to get married so young. I wanted to get out there and establish myself as Miss Independent first. Well, I did that and now the pickins have definitely slimmed. From this side of things, I can appreciate the beauty and blessing of struggling together in those transitional 20s.

This weekend I attended the wedding of a couple who married in their 20s...in the 80s. It was actually a recommitment ceremony and it will sit as one of the most emotional, memorable weddings, if not experiences, of my life.

This couple is part of my much-loved intergenerational small group. It has been an answer to prayer to find a few other people from different walks of life to share life with. (Side note: We first got together as part of our church's 40 Days of Purpose campaign and dubbed ourselves The Zeros because as a group, grace didn't rank very high on our giftedness. This weekend we realized how much God has taught us. Each family has faced a significant crisis since joining our group).

Last October, it looked like these two were going to divorce. The wife shared that she felt like their marriage was a Jenga game knocked over one too many times. She was staring at all the pieces and didn't have the desire or strength to put them together again. As a two-time child of divorce, it's very hard for me to hear this sort of thing because I know that divorce rarely solves problems. Couples who fight before they divorce fight after the divorce, whenever children are involved. So I sat and listened and God gave me a thought.

The next day I went to Meijer and bought a Jenga game...and a big ol' tube of Super Glue. I wrote a note to my friend saying something to the effect that she doesn't have the strength or desire to repair her marriage, which makes her ready to let God be the glue of their relationship.

At the wedding, this couple had a Jenga tower next to the communion elements. When they addressed the small group of us assembled, the husband and wife shared the litany of things God did to show them how the only one happy when a couple divorces is Satan. They shared the things that brought instability to their marriage and in one sweeping swoop knocked over the Jenga pieces. After a moment of letting that image sink in, they pulled out the Jenga tower I gave them. It was super glued together and they had written "Christ" on the center blocks, and Scripture and situations on the long pieces that described the process of rebuilding--everything from a marriage class they took to our small group. Then they took a 3-strand cord and wrapped it around the tower.

That's just one example of the symbolism of this ceremony, and the most personal to me, but the whole event created such an amazingly wonderful demonstration of the choice to love...and to keep loving. For our small group, it was incredibly powerful to revisit all those moments that we shared that led this much-loved couple to reconcile. For me, as the token single, it was a healing affirmation that God sometimes uses us best in the areas where we are weakest and can do nothing but trust Him to lead us on.
Posted by Jen @ de Jong Dream House at 7:25 AM

That is BEAUTIFUL. Thanks for sharing this!

Wow... that made me teary. Absolutely beautiful.

Wow. It is the only word that expresses what I feel after reading this.

since this is my son and daughter-in-law, thank you for being there for them. we are so pleased that they are working things out.